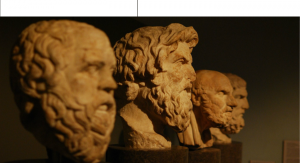 For all you philosophical-theological-Greek nerds out there, here’s something fun. As some have observed, Gregory of Nyssa’s On the Soul and the Resurrection is written in a way that mirrors Plato’s Phaedo.[1] A close reading of both show that this is correct. For example, Gregory utilizes the format so familiar to readers of Plato, namely, the dialogue. Gregory also follows Plato by musing on similar topics and themes throughout his work. It seems pretty clear that Gregory is quite familiar with Plato (as we all should be). What’s most fascinating, though, is how Gregory will take up some of Plato’s own thoughts and arguments and give them a slightly different spin. A close reading of the Greek will reveal the beauty of it all.

In the Phaedo, there is a section where Socrates leads a discussion about how, upon death, the soul is “separated from the body” (81b).[2] For Socrates, the “body” is something that carries quite the negative vibe. The word he uses here for body is σῶμα (soma). For him, the soma corrupts and pollutes the soul (81b); the body is a prison of sorts (81e). At one point, Socrates discusses how the “soul…has been literally bound and glued to the body [soma]” (82e). The overall idea here is that the soma is a negative thing that must be overcome. But even at death, the soul’s contamination by the body is hard to overcome even though they are separated, says Socrates. The soul, having been “glued” to the body, after all, is thoroughly contaminated (81b-e). There is a lot to say here, but the point is that the body—with all its passions and lusts—is quite bad for the soul.

What’s interesting is that when it comes to Gregory’s On the Soul, the reader who is familiar with the Phaedo will quickly notice that Gregory alludes back to it, specifically, back to Socrates’ idea of the soul being “glued” to the body. In Gregory’s work, we see him dialogue back-and-forth with his sister, Macrina, who passes on to him various insights, answering his questions, and so on. When she refers to the soul being glued to the body, Macrina, like Socrates, understands this as a bad thing—though with a bit of a caveat. Notice what she says and how she says it (I’ve interspersed the English with the Greek):

“…the Lord seems to be teaching that we who are living in the flesh [ἐν σαρκὶ βιοτεύοντας] ought as much as possible to separate ourselves and release ourselves from its hold by the life of virtue, so that after death we may not need another death to cleanse us from the remains of the fleshly glue [τῆς σαρκώδους κόλλης]. Then, as if chains have been broken away from the soul, its course may become light and easy towards the good, when no bodily weight [or “bodily pain”; σωματικῆς ἀλγηδόνος] drags the soul to itself…”[3]

As you can see, there is a noticeable allusion to the Phaedo.[4] The illustration of the soul being glued to the body/flesh is certainly a nod to Plato.[5] But here’s the thing: in key sections, Macrina does not use the word soma (body); rather, she uses sarx, which means “flesh” (as seen above).

This is important because Macrina, as a Christian, does not think the body is essentially bad. Arguably, she utilizes the Pauline notion of “sarx” (as opposed to “soma” in the above Platonic sense) to imply that what is wrong with the body is not the body per se but rather that it has been corrupted by sin.[6] Paul, as we all know, understood the body to be a sin-corrupted organism, often referring to this reality as the “flesh” (Rom 7; Gal 5:16ff; cf. Paul’s use of soma in Rom 8:23. There, Paul notes the soma will be redeemed/resurrected).

When Macrina replaces soma with sarx in key sections of her argument, she is arguably tweaking Plato in light of Paul. It is true, though, that Macrina does use soma when she speaks above about “bodily pain” (σωματικῆς ἀλγηδόνος), but this does not mean she is lapsing into a purely Platonic view of the body as bad. A strong case could be made, I think, that her use of soma here is qualified by her previous uses of sarx. By doing so, she can maintain the goodness of the body all the while holding to the notion that it has been corrupted by sin and, therefore, will be redeemed.

6. See the note in St. Gregory of Nyssa, On the Soul and the Resurrection, 75, n.1. Here Roth observes that, “Macrina…replaces the word ‘body’ with ‘flesh’ in the Pauline sense of sinful human nature (body and soul).”